Patients who rely on medications are of all ages, but the way they access them varies

Age can play a significant part in patient healthcare choices.

Patients in our recent survey were varied in their responses when it came to transportation, telehealth use, discount programs and pharmacy interactions.1 Some of this data debunked typical stereotypes: For example, there were no significant differences across age groups when it came to internet availability or technology use and availability. There were also no significant differences in the uninsured population across age groups.

More often, it’s preferences and habits that seem to separate generations when it comes to medication access.

Patient data referenced in this article is from the CoverMyMeds Patient Survey, 2020 unless otherwise cited

While the COVID-19 pandemic has certainly kept many healthcare encounters remote this year, recent data shows in-office visits are beginning to recover and even returning to baseline levels.2 Telehealth, while dropping off from the number of visits earlier this year, is still exponentially higher in use than ever.2 This indicates a notable trend toward it becoming a more permanent option for patients.

Ages 19-45 were twice as likely as those 46-66 and older to cite convenience as a reason for using telehealth. Perhaps their access to transportation contributed to this response: Just half of 19- to 25-year-olds used their own vehicle to get to and from doctor’s appointments. A quarter of this group used public transportation and one in five said they rely on a friend or family member to get to their appointments. Those between 19 and 35 years old were twice as likely as other age groups to use public transportation for getting to the doctor.

Access to the pharmacy, potentially linked to geographic location, is another barrier for some. Those 36 to 45 years old were more than three times as likely as other age groups to say they didn’t have access to a preferred pharmacy within 10 miles of their home. This age range was also the second-most likely to live in rural areas at 20 percent, behind the age 56-65 demographic, of which nearly a quarter live in rural areas.

Patients 45 years old and younger said they prefer transparency and choice in their healthcare — values they hold as consumers in general.3 When survey respondents indicated they had participated in telehealth, they were then asked to select their reasons for doing so. This group was nearly twice as likely as others to say telehealth gave them more control over their healthcare. Convenience and cost were also highly ranked in this group over others.

For those older than 45, their reasons for participating in telehealth were more likely to be to prevent the spread of COVID-19 and their provider simply wasn’t offering in-person appointments.

And more control may be necessary considering many patients between 19 to 45 years old are facing more healthcare instability than those 46 and older. 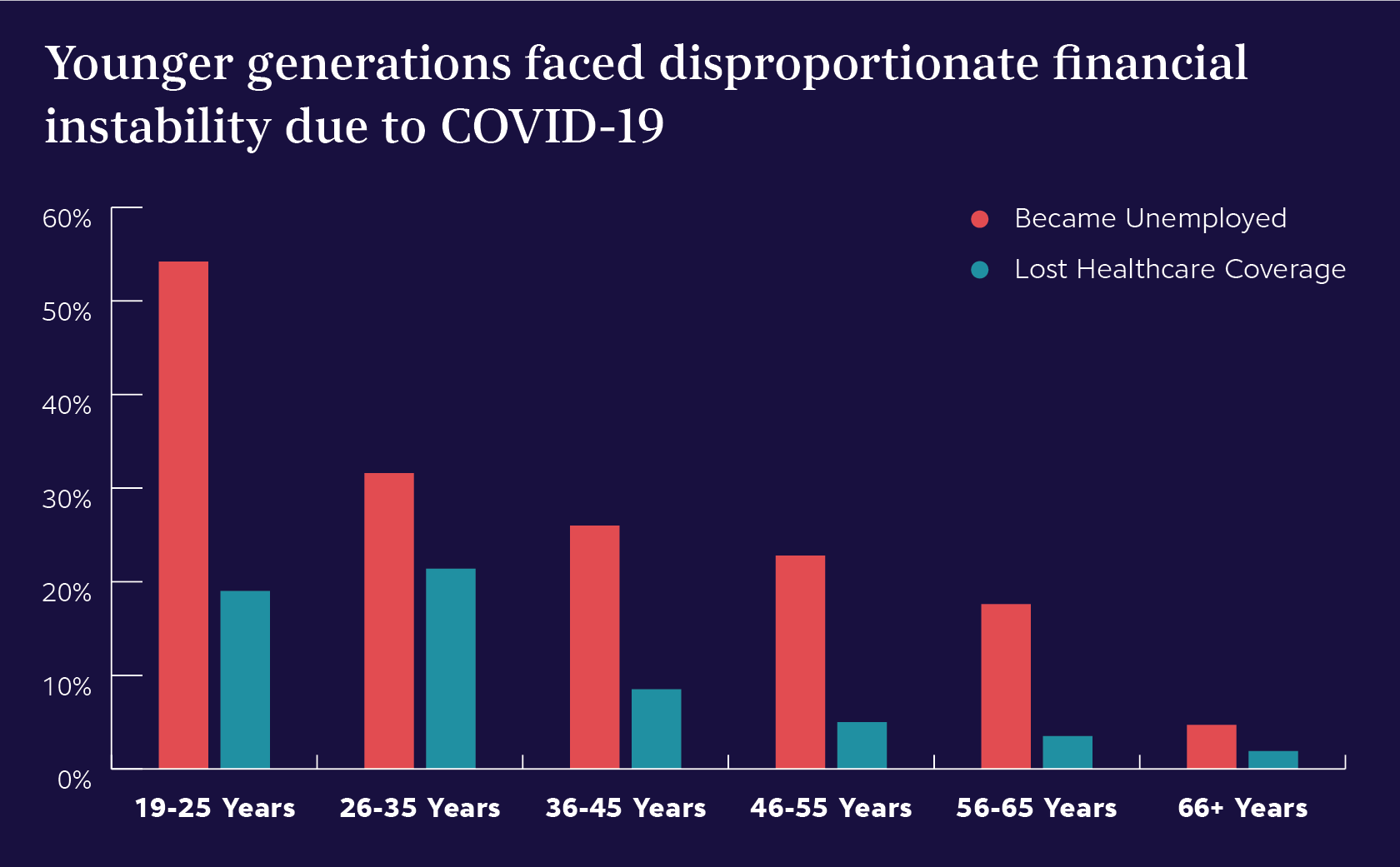 With tighter incomes, patients often have to make difficult decisions to afford their medications. Sometimes these decisions happen at the pharmacy counter: 67 percent of all patients have gone to pick up a prescription and found out it cost more than they expected. When we look at just those ages 26 to 35, this jumps to 79 percent, the highest of all age groups. This was also the generation most likely to leave the pharmacy emptyhanded.

When asked about patient assistance programs for medications, 37 percent of all patients were unaware they existed. This number increased with older populations — nearly half of those ages 56 to 65 were unaware of such programs.

Interactions at the Pharmacy

Nearly three in four patients said they are regularly asking their pharmacist questions about their medication. In fact, 85 percent of 26- to 35-year-olds are regularly asking questions, perhaps a nod to this generation’s desire for transparency — or perhaps older generations have simply been on their medications longer and have fewer questions.4 Older populations were less likely to ask their pharmacists questions than younger groups, with just over half of those 66 and older saying they don’t.

Nearly one in three younger patients said they’ve relied more on their pharmacist for information regarding their condition and medication since COVID-19.

It seems the questions the older generations do have for their pharmacist are around prescription medication pricing. When asked about comfort in discussing medication affordability with their healthcare provider, patients 56 and older were twice as likely to say their provider was not the person they feel they should be discussing medication affordability price with — which typically leaves the pharmacist, according to our provider and pharmacist surveys. When a prescription costs more than they expect, older age groups were most likely to resolve the issue by asking the pharmacist about cheaper alternatives.

These generational differences in medication access reinforce the need for patient options in their healthcare. Meeting patients where they’re at – in their comfort level and daily environment — can better serve them with the care they need, including the right medication for their condition.

Read more about what all patients want out of healthcare.