With every intentional pen stroke, Henry Hess adds another piece to his mural dedicated to Franklinton and the community that helped shape his life and career.

Art isn’t anything new to Henry. His parents, Amy and Tom Hess, recall fond memories of him rummaging through their house for any materials he could use to create. Henry’s passion for art was so evident that his parents rented a studio in 2014 for their then-14-year-old to use during his summer break from school.

“This was something we never saw coming,” explained Amy. “We thought we would be done [with the studio] by the time Henry started back to school. Five years later, and here we are.”

Henry’s plate has always been nothing short of full; balancing the responsibilities of a teenager while also tending to his budding art career. Henry also has a unique perspective, as he was born with autism. Patterns, structure and routines are themes Henry relies on to function optimally in his daily life, but the Franklinton-based studio has played a monumental role in advancing not only his professional growth, but also his personal development. The art-filled environment, along with his role models and friends, have enabled Henry to be more adaptable. According to Tom, “when Henry’s in his studio, he’s free.”

The same summer Henry had his first studio, another pivotal aspect of his career unfolded: meeting his mentor, Alicia Jean (AJ) Vanderelli, Curator and Founder of The Vanderelli Room located at 218 McDowell Street, and overall staple in the Franklinton community. AJ formed an instant bond with the blooming artist and believed so deeply in his ability and artistic potential that she offered Henry his first solo exhibit at age 14. With the full support of his parents, the Hesses arrived with seven bags full of Henry’s art work, and the rest is history.

Fast forward to present day and you’ll find 19-year-old Henry taking on a project commissioned by CoverMyMeds with a scope he’s never attempted before: creating a celebratory mural symbolic to people in the Franklinton community who have impacted his life.

Henry’s finalized mural will be featured on a wallscape near the building site for CoverMyMeds’ new campus in Franklinton. Using the wallscape to feature messages that support the community and the company is aligned to CoverMyMeds’ overall approach for the campus: to create a remarkable place for our employees and our community.

“For the first installation, we wanted to focus on the community. We thought the best way to do that would be to donate the space to a local artist and ask them to create a piece that depicts their community as they see it and is inspired by their experience in Franklinton,” said Jared French, Creative Manager at CoverMyMeds. “Henry is a true inspiration and a phenomenal artist. It’s clear he’s had an incredible impact on the Franklinton community, and in turn, they’ve had an incredible impact on him, so this collaboration was a perfect fit.”

While looking at the expansive art piece decorated with portraits of those close to Henry’s heart, Henry’s parents and mentor, AJ, describe the background behind some of those featured. AJ beamed, “these are his friends, the people he loves.”

Glowing with pride, Amy and Tom detail how effortlessly Henry was able to execute the wallscape design, and attribute the ease of the project to his love for Franklinton and the comfort he finds in the community. “The best part of Franklinton is the people,” said Tom, “and Henry has the ability to capture the essence of people in just a few lines.”

View Henry’s 100-foot art installation off of Hartford Ave. in Franklinton, with views from McKinley Ave. and Broad St., as well as from main thoroughfares I-70 and Rt. 315. The original art piece will also be displayed at the CoverMyMeds Miranova office space beginning next week. 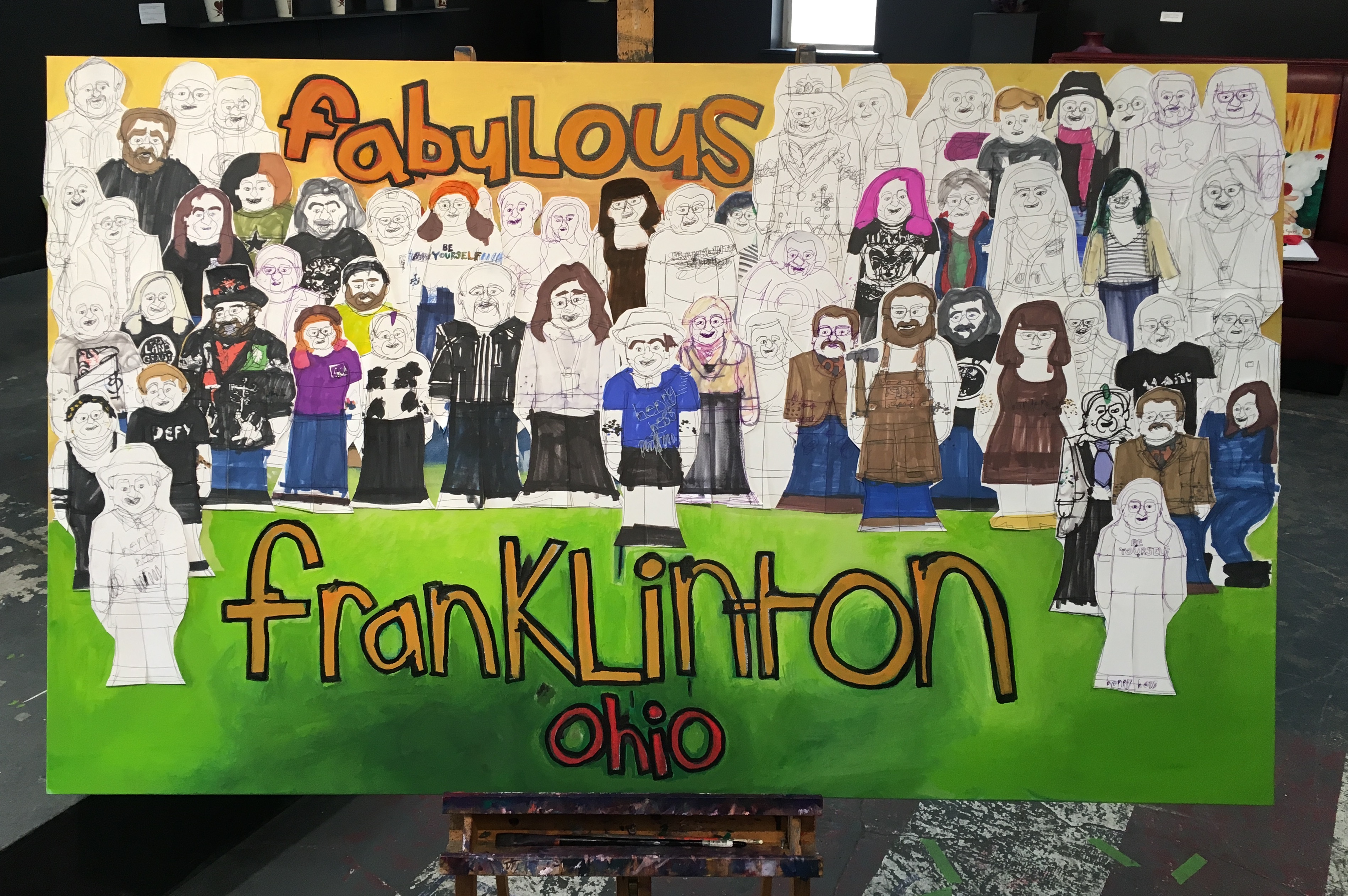 Click here to see more of Henry and his creative process.

Danielle Morehead is an Account Coordinator at CoverMyMeds. As an active member in the company’s internal career development program, she had the opportunity to interview, research and write this article.